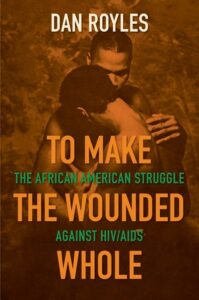 To Make the Wounded Whole: The African American Struggle against HIV/AIDS is now available from University of North Carolina Press! Use promo code 01DAH40 at checkout to receive 40 percent off the cover price. Ebook readers can also purchase the Kindle edition from Amazon.

To Make the Wounded Whole offers the first history of African American AIDS activism in all of its depth and breadth. It introduces a diverse constellation of activists, including medical professionals, Black gay intellectuals, church pastors, Nation of Islam leaders, recovering drug users, and Black feminists who pursued a wide array of grassroots approaches to slow the epidemic’s spread and address its impacts. Through interlinked stories from Philadelphia and Atlanta to South Africa and back again, this book documents the diverse, creative, and global work of African American activists in the decades-long battle against HIV/AIDS.

Here’s what scholars are saying about To Make the Wounded Whole:

A brilliant account of African Americans’ underappreciated grassroots responses to the AIDS epidemic. This important book strikingly documents this multifaceted health activism and its novel array of healing strategies. A groundbreaking, essential contribution.

Alondra Nelson, author of Body and Soul: The Black Panther Party and the Fight against Medical Discrimination and Deputy Director for Science and Society, White House Office of Science and Technology Policy

To Make the Wounded Whole and the accompanying oral history archival project are masterful achievements.

To Make the Wounded Whole is an exciting, worthwhile, and accessible addition to the quickly growing field of HIV/AIDS history because it shines a significant spotlight on its often-overlooked intersection with Black communities and history.

Royles’s project is of grand and urgent scope. To Make the Wounded Whole — with its seven case studies on moments in the movement, each detailed, finely researched, and compassionately written — engages in a rich conversation about Black activism within the AIDS epidemic across almost half a century.

Royles has delivered a masterfully nuanced yet clearly rendered account of one of the greatest challenges to African American health and politics in the twentieth and twenty-first centuries.

To Make the Wounded Whole is original and important. It challenges the notion that African Americans were passive, powerless, or oppositional in addressing the health crisis, demonstrating that Black LGBTQ activists and their allies developed powerful and influential community-based responses to the AIDS epidemic.

Royles shows that activists worked to address not only the HIV/AIDS epidemic itself but also the structural injustice that made African Americans more vulnerable to the disease. . . . Highly recommended.

Along with To Make the Wounded Whole, I have several recently published book chapters and articles:

Historic Context Study: Violence against People of African Descent in the United States, 1500-2020

I currently serve as the principal investigator for a comprehensive historical context study, contracted by the National Park Service (NPS) of violence against people of African descent in the United States and its territories from 1500 to the present day. This study will encourage new interpretations of such history for public audiences, through both future NPS theme studies and the addition of key sites to the National Registry of Historic Places and list of National Historic Landmarks.

This study will also focus on the ways that communities of African descent have resisted anti-Black violence, and the ways that this resistance has been shaped by changing historical contexts. These responses have included maroon communities formed by people fleeing enslavement, armed uprisings of enslaved people, anti-lynching campaigns, organized self-defense groups, and nonviolent social movements. While recognizing the importance of specific historical context to these responses, we can identify some themes that run across them: the question of whether to meet violence with armed struggle; the question of whether to aim for legal remedies, broader social change, or changes to Black consciousness; and what tactics, such as moral suasion or direct action, to employ.

I am currently working on a social, cultural, and intellectual biography of Claude Brown, whose 1965 autobiographical novel Manchild in the Promised Land won praise from critics upon its release and has sold millions of copies worldwide. Brown offered a gritty portrayal of everyday Harlemites’ struggles to survive during the 1940s and 50s, in the aftermath of the Great Migration, and recounted his troubled youth spent in and out of reform institutions. Brown published his novel just as Americans were struggling to make sense of urban violence and growing black militancy alongside the victories of the civil rights movement. Amid the growing urban crisis, Brown used the success of Manchild to carve out a role for himself as a commentator on gang violence and the War on Drugs.

Using archival, oral history, and literary research, this project will trace the afterlives of the Great Migration, of Brown’s best-known work, and of the author himself. Brown’s parents were among the millions of African Americans who fled the Jim Crow south to seek a better life in the urban north, but found that the “promised land” fell far short of expectations. How did they shape Harlem’s culture, and how did their disappointment shape the generation that followed? Brown himself spent much of his adulthood in the wake of Manchild, his defining achievement. How did he deal with the afterlife of his own success, and what does the arc of his career tell us about race and the politics of the public intellectual during his lifetime? Finally, Manchild found its own afterlife in policy discussions, first amid urban unrest in the 1960s, and later on during the War on Drugs in discussions of gang violence and juvenile “superpredators.” How did others mobilize Brown’s work in formulating the public policy of crime and punishment, and how did Brown respond?

As part of my research for To Make the Wounded Whole, I launched both an oral history project among African American AIDS activists and an online archive of the fight against HIV and AIDS in Black America.

From 2017 to 2019 I also served as the principal investigator on a federally funded two-year project to digitize the archives of the Virginia Key Beach Park Trust, which preserves the history of Miami’s “colored only” beach. As part of that project, a team of five FIU graduate students has digitized thousands of unique documents and artifacts that capture Miami’s African American history.

I regularly teach courses in United States, African American, LBGTQ, oral, and public history. My approach to teaching emphasizes investigation, discussion, and active learning, and my upper-level and graduate courses push students to interpret the past for public audiences. For example: